Us Blah + Me Blah  wishes you a very good read ♪ 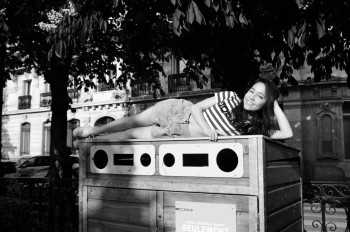 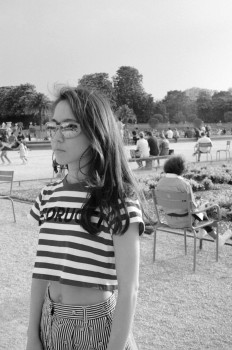 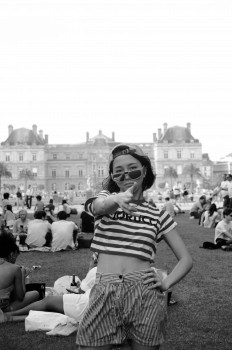 Alice Kunisue is a Franco-Japanese artist based in Paris whose work ranges from video direction to photography, illustration and painting. If you’d have met her only a few years ago, you’d never have expected her to be where she is today: directing music videos for Ed Banger Records’ Vladimir Cauchemar and the Grammy-nominated band Franz Ferdinand.

Born and raised in Tokyo, Alice gained a degree in political sciences in Montreal before moving to Paris to pursue a creative career, enrolling in an intensive course which, while highly demanding, awakened the skills which have allowed her to become a multi-talented practitioner with a fluid style and a light touch, switching smoothly between different mediums as well as between client projects and her personal work.

To give a brief overview of Alice’s output, her video work is full of humour, her photographs play with intrigue while her paintings strive for realism with a quirky note. In this interview, we spoke about her creative process, her new focus on video direction, and how she sees her future.

Can you start by telling us about yourself – your background, education and current practice?

I was born in Japan and grew up there. At seventeen, I went abroad to study political science at the University of Montreal. After completing my bachelor’s, I moved to Paris and studied art direction for two years, then worked in graphic design as a freelancer while developing my personal projects. Right now I’m more focused on art directing, but I try not to confine myself to one discipline as I love photography, art direction and painting.

From political science to creative direction

Before we discuss your artistic practice, could you share why you initially decided to study political science?

When I was in high school, I took art classes and really loved it. At around fifteen, I remember being attracted to the idea of going to art school because I loved to draw, but I really had no ‘art people’ around me, and I couldn't imagine myself working in the art or design worlds. I didn't even think that art or design jobs existed. But I was also really interested in sociology and history, so I decided to study political science, in Montreal.

Once I got there, although I was interested in my course, I began to feel like I didn’t fit in with the political environment there at all. Towards the end of our degree, most of my friends in Montreal were thinking of going to work in the public sector, and I really couldn’t picture myself writing reports all day so I started researching careers in design. I found out that you could be something called an ‘art director’, and, even though I didn’t really understand what it was about, I felt like I had to try it. I moved to Paris, where I took an accelerated two-year course in art direction and graphic design.

An art director with an academic background in political science must be quite a rare thing. Have you ever thought about how you could make the most of that?

Studying sociology and politics was both a privilege and a curse. It’s actually terrible to understand the mechanisms behind the world’s injustices, because you feel so powerless. But you also get to find out how you can really make a difference, and art and culture can definitely impact society and individual mentalities. I’d love to incorporate this knowledge into my own creative practice.

Where did your love of art come from?

Definitely from my Japanese grandmother. She was a nurse, but she was always painting in her spare time. She taught me everything – she’d buy me art equipment and we would spend weekends together at her home in Tokyo, painting in watercolours. A lot of my passion comes from her, she is definitely my soul sister.

You’ve recently been focusing more on video direction. How did that transition take place?

It happened progressively, though I’ve always had an interest in video. I graduated from my art direction and graphic design course in 2015 and started freelancing in early 2016. During my first year as a freelancer, I was all over the place – doing illustration and photography, as well as layouting for magazines, and I was making videos at the same time, as side projects. Once I had built up a video portfolio, I started showing it around and that’s when Pedro Winter 1 suggested I make a music video for Vladimir Cauchemar. 2 It was really kind of him to trust me with that job, as I’d never done a serious video direction project at that point. I feel like it suits me really well because it combines sound and image, the two senses that affect me most. I really wish I could add smell to that!

The music video that you made for Vladimir Cauchemar, Aulos, 3 although light-hearted in tone, must have taken a lot of energy to make. What was your process like?

I already had a rough idea of what I wanted it to look like, so I planned the filming beforehand. The shoot took two days – on the first day, we filmed what I had prepared and the second day was way less structured. In the end, the best scenes were the ones we came up with on the second day.

We had a bit of an issue on the shoot – our tripod was kind of shaky, which made the post-production work a nightmare. In order to duplicate Vladimir, I had to do what is called rotoscoping – basically cutting him out frame by frame, which took years as you can imagine. Now that I've had time to sleep since then, I feel like it was kind of part of the fun.

Aulos was really widely shared on social media and pretty much went viral. Did you expect such a huge reaction?

Of course not! What surprised me most was how it was used as a meme. I wasn’t expecting that at all but it was such a good surprise. I made the video in my own style, together with Vladimir, and I am so happy that it also appealed to a much larger audience.

It was also very gratifying to see that it was particularly well-received in Japan. Most Japanese people were commenting like, “that ojisan 4 is so kawaii”, which is exactly how I felt, while French people seemed to like it in a more “WTF” way. The difference in reactions between cultures was very interesting to witness.

Your output is extremely diverse, both in terms of medium and style. What drives your creative process?

I always try to listen to my intuition. A lot of what I’ve done in the past didn’t work out, and I feel like it’s because I used to pay too much attention to external factors. I think that art can only make sense if you're authentic and true to yourself. I try not to listen too much to other people's reactions to my work, because then the temptation is to start playing up to their expectations. Having said that, I still always try to make my work entertaining, so it’s a difficult balance to find.

Another aspect of your work is client-based. How difficult is it to take on commercial work when you try to disregard external factors?

I probably shouldn’t say this publicly, but I always try not to invest too much of myself emotionally when it comes to my commercial work. What I mean by that is that I won’t fight too hard to impose my own artistic vision, because after all, the end goal for commercial work is to please the client. It’s fine if you don’t revolutionise aesthetic norms or if it’s not at the avant-garde of the design practice.

For example, I painted a fresco for the office of an insurance company two years ago. The boss had given me a PDF beforehand for inspiration, to show me what his tastes were like. It wasn’t at all like what I’m into personally, but I really enjoyed working for him because he loved the end result so much. I like this part of design, its original intent – providing form to an idea and/or a project. There’s something very satisfying about making something that fulfils the needs of someone else’s project and I actually think it’s a privilege to be able to do this kind of work.

Having said about not emotionally investing too much in my client work, of course I always end up investing way more of myself than I initially meant to, and I tend to always push towards making something that matches what I genuinely want to do.

A future in multimedia

Last year must have been an important year for you – your videos were so well- received, and you seem to have found a creative medium that really suits your personality. Do you think you’ll focus on video for a while?

I really like painting and photography too, but as I said before, I feel very comfortable working with video. It’s also been going well recently with my projects with Vladimir Cauchemar and Franz Ferdinand, 5 so I’m most probably going to focus more on that.

Something that I’d like to do in the near future though is blend the two mediums I like most – painting and video. For my upcoming solo exhibition in Japan I’d like to find a videographic approach to painting. 6 Every time I’ve worked with more than one medium, I’ve realised how each medium elevates the other one. I enjoy making the most of each different medium’s richness, in order to make the whole even better.

Last but not least, could you elaborate on how you are thinking of blending painting and video?

Right now, the paintings I’m working on are based on videos that I’ve been taking on the street. I like the idea of spending multiple hours recreating a moment that happened in a microsecond, and videos capture sound, ambience and movement, which you don’t have if you’re only working from still images.

This interview was posted on 11 September 2018 and was originally conducted in Japanese. 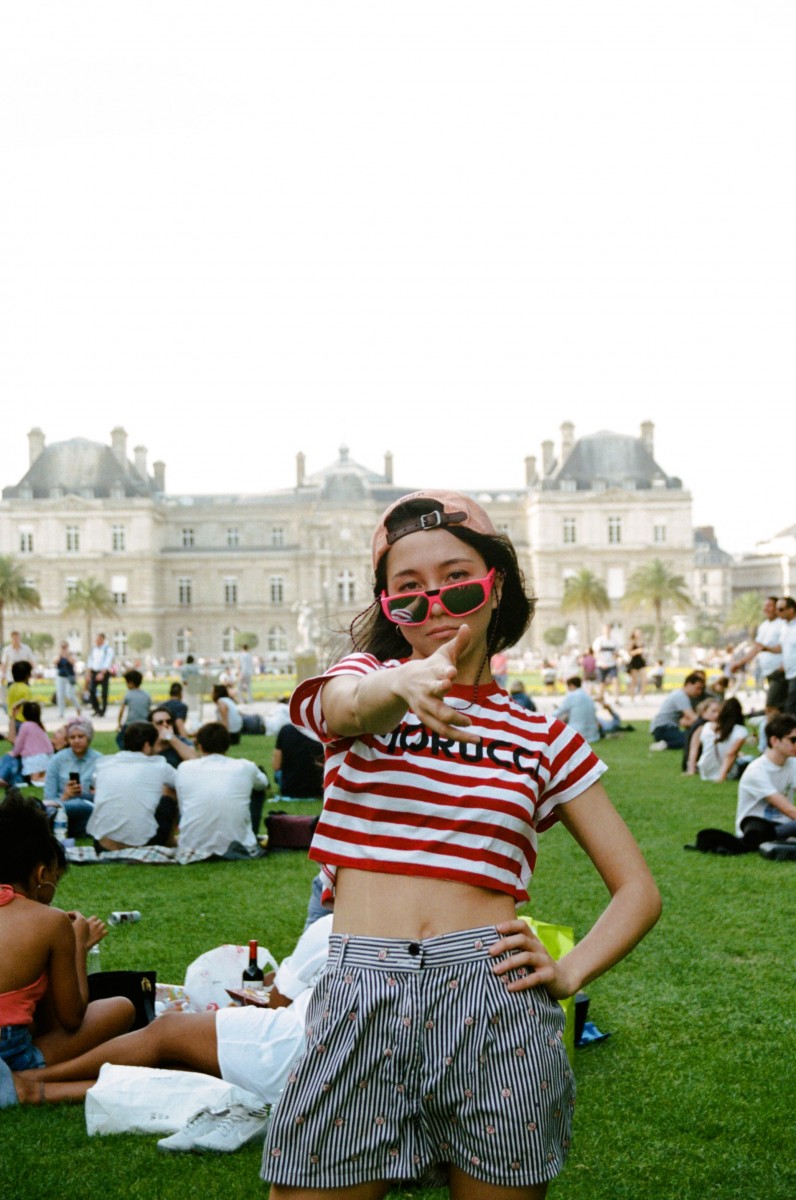 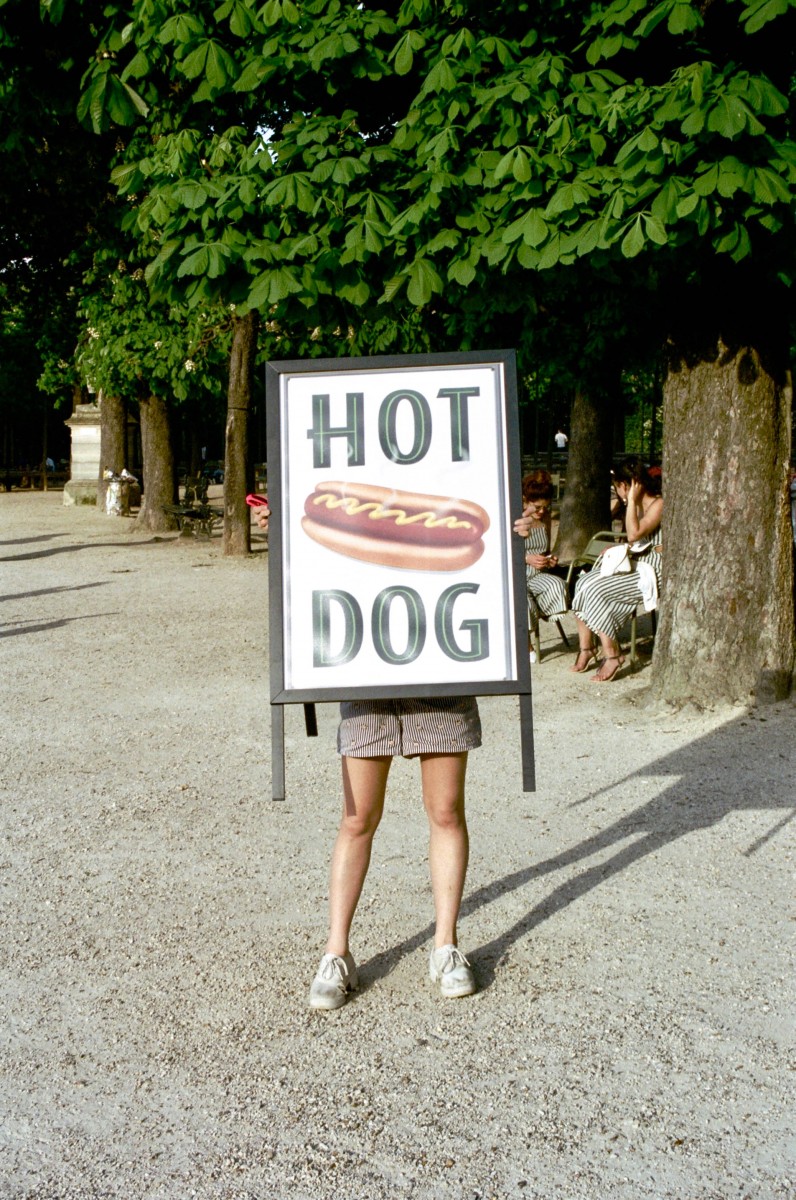 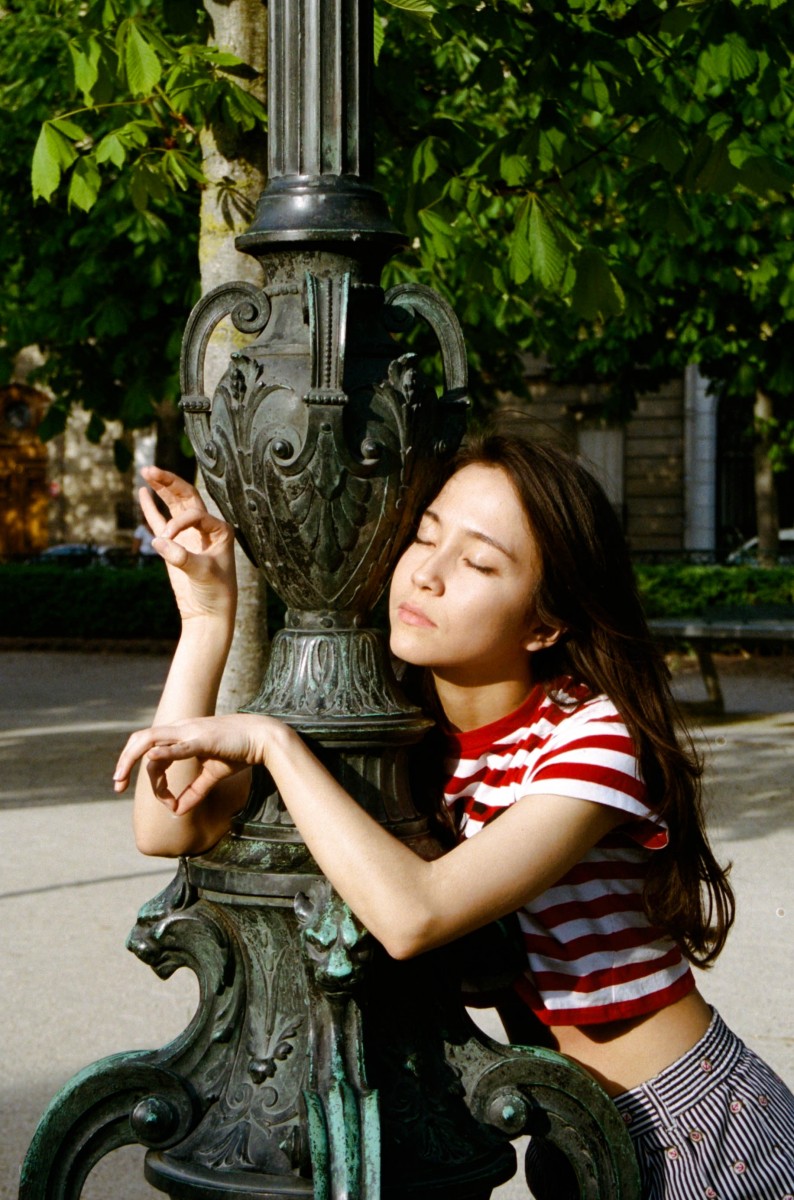 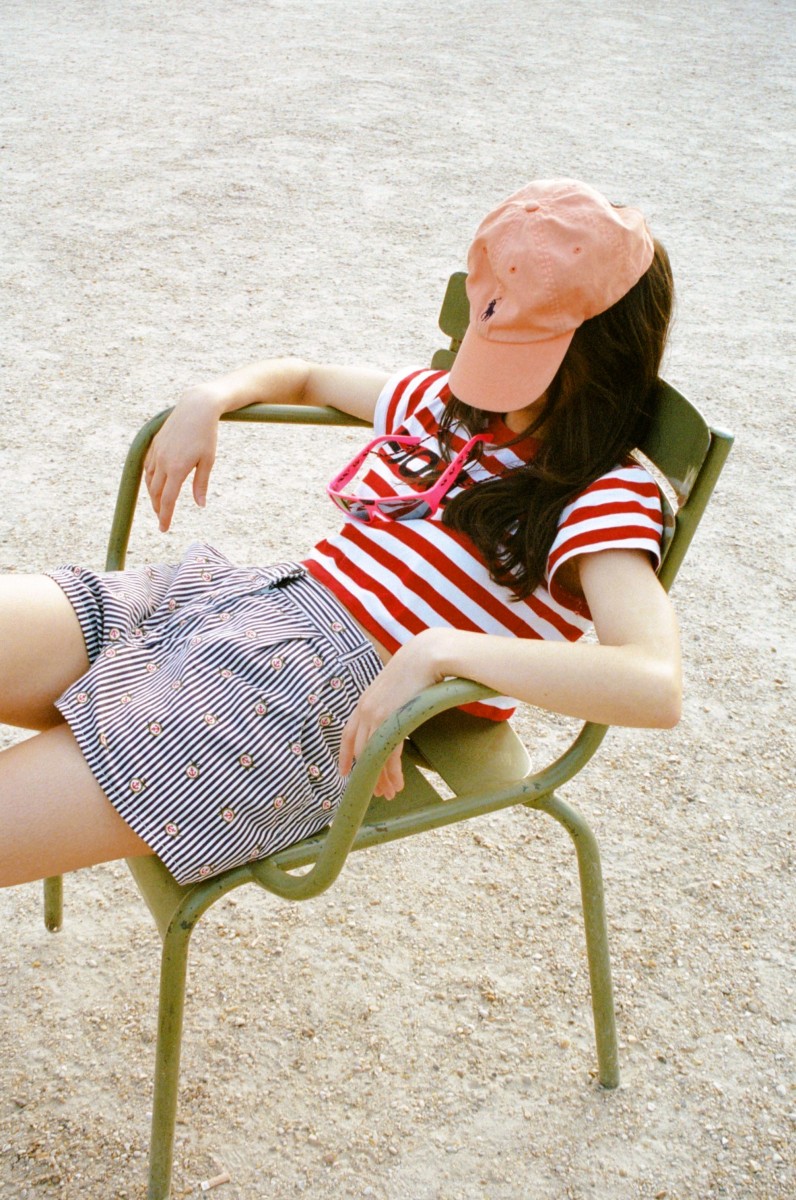 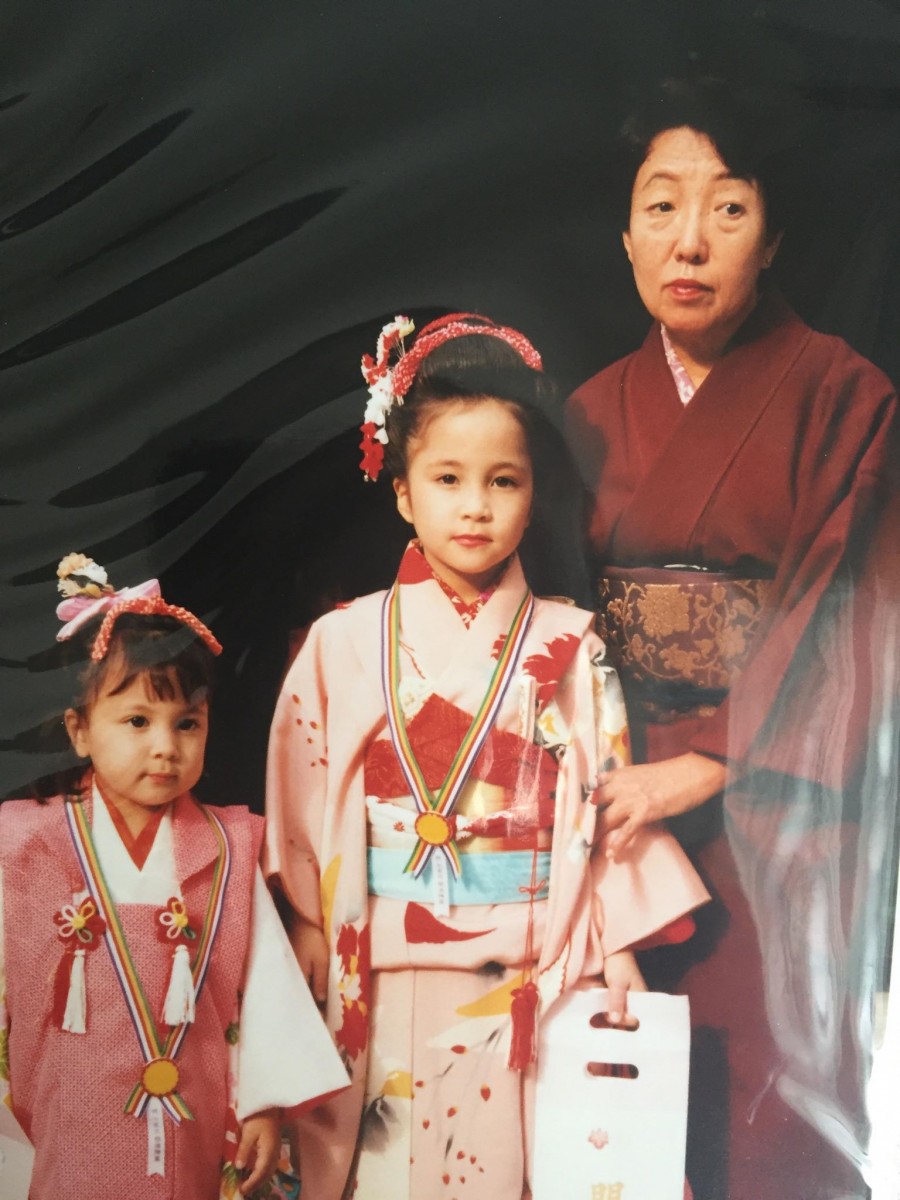 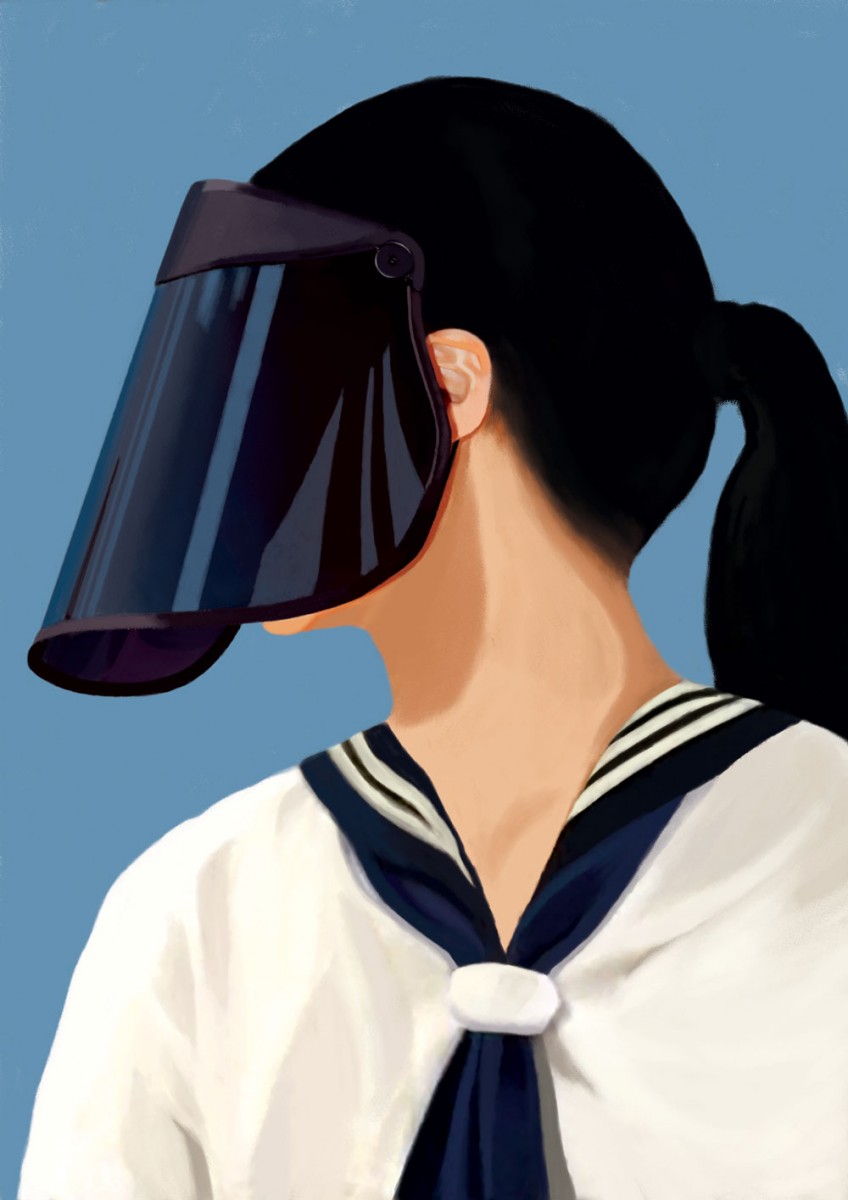 ‘Hakuchō no Jun’ (2018) Painting exhibited at the Zou-No-Hana Terrace during Alice's solo exhibition. 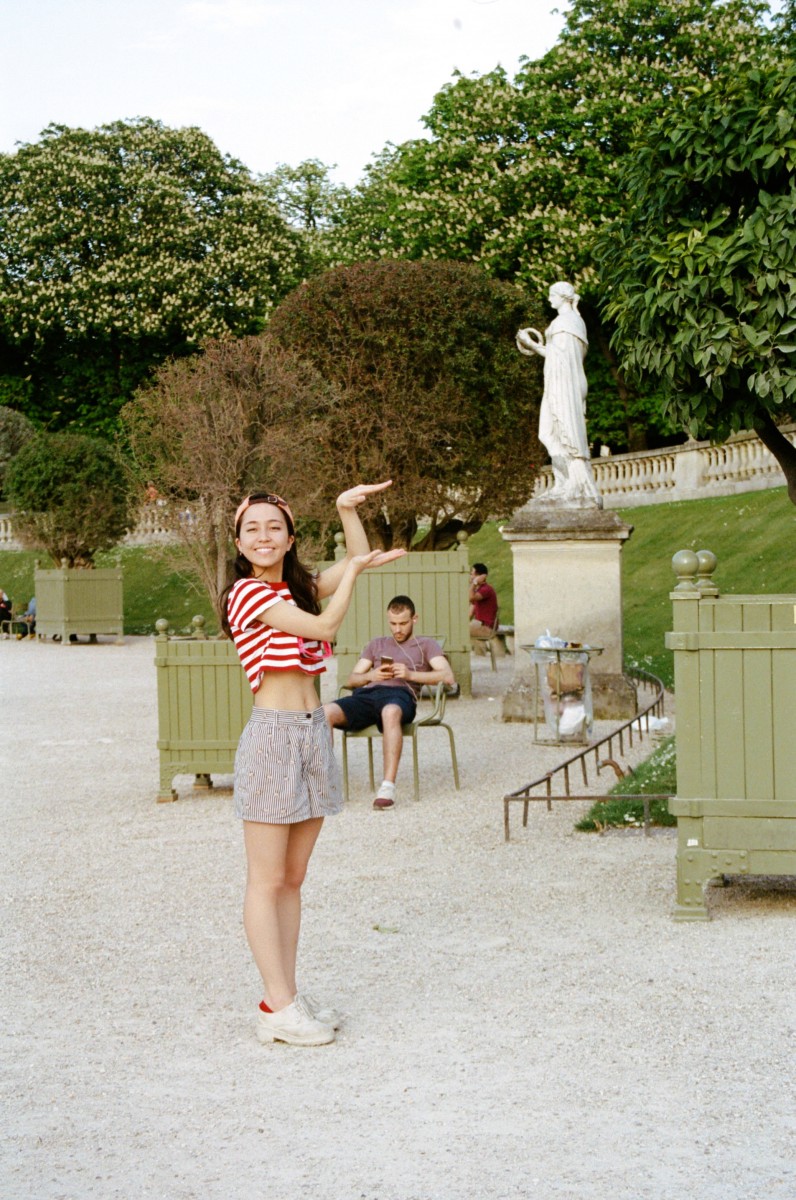 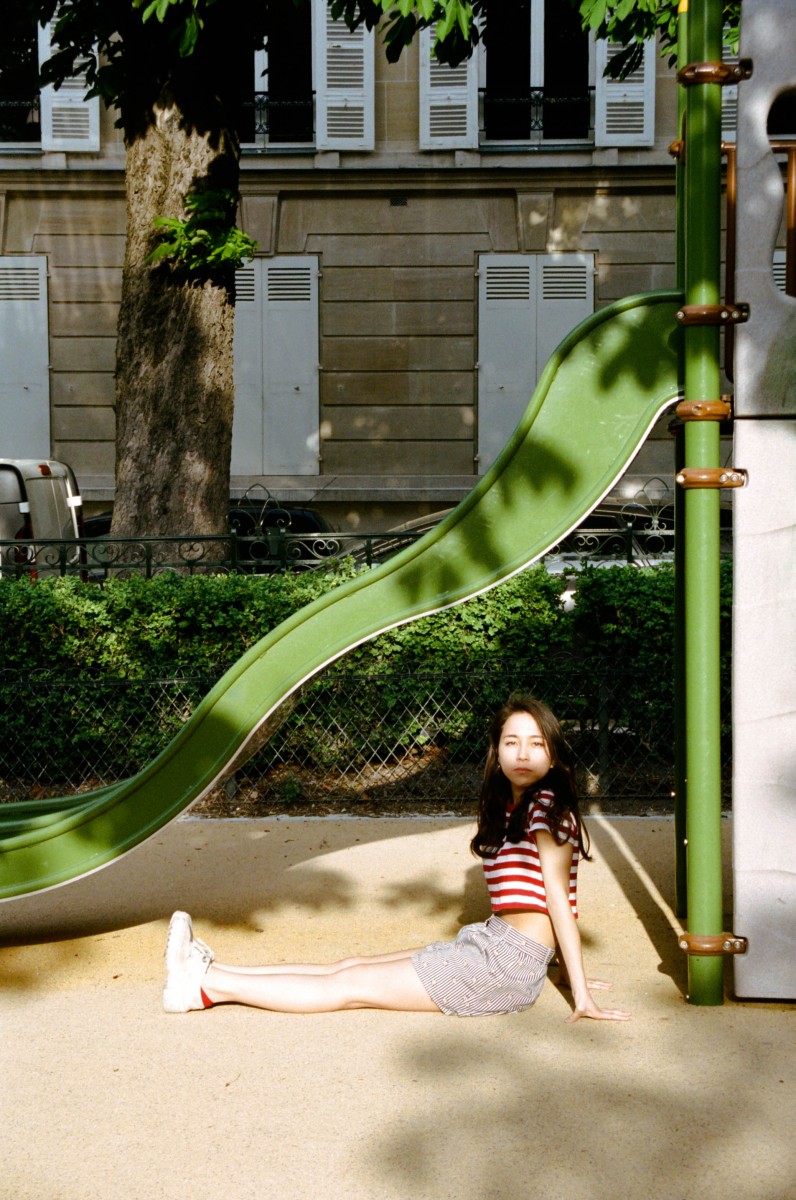 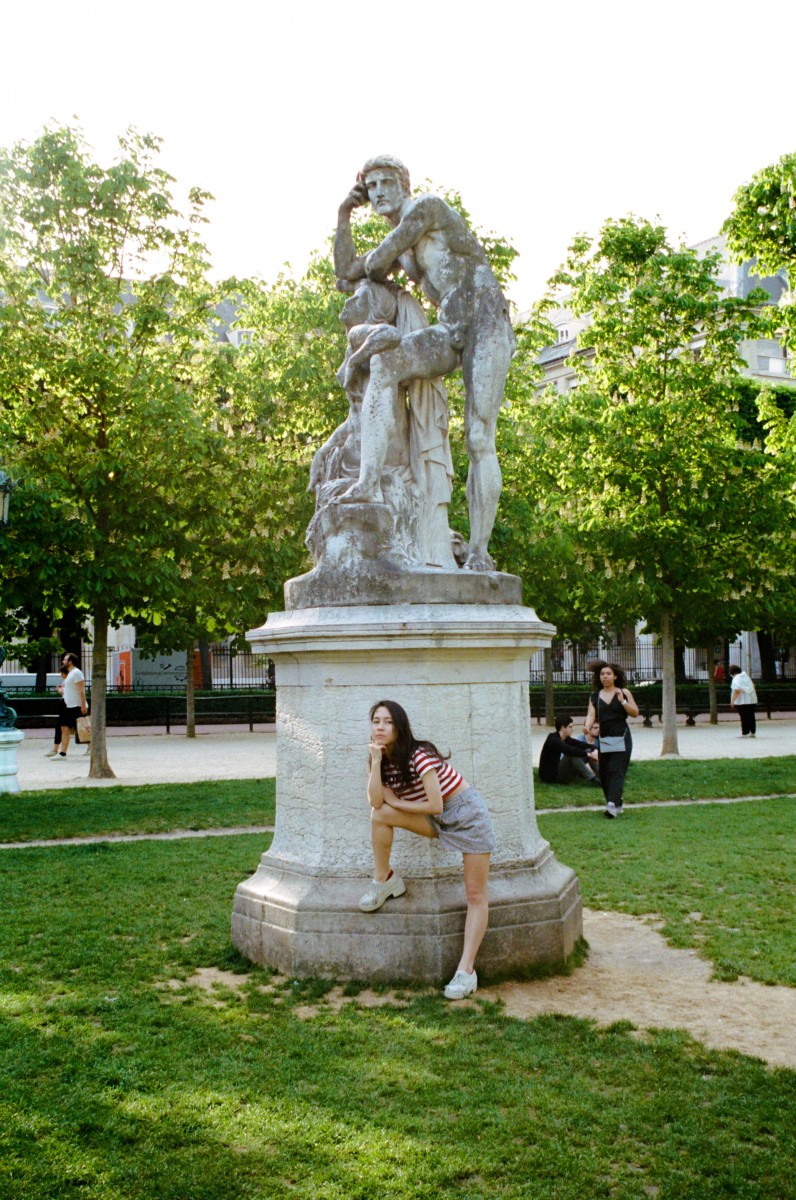